Which one to purchase this year, iPhone 12 or iPhone 13? 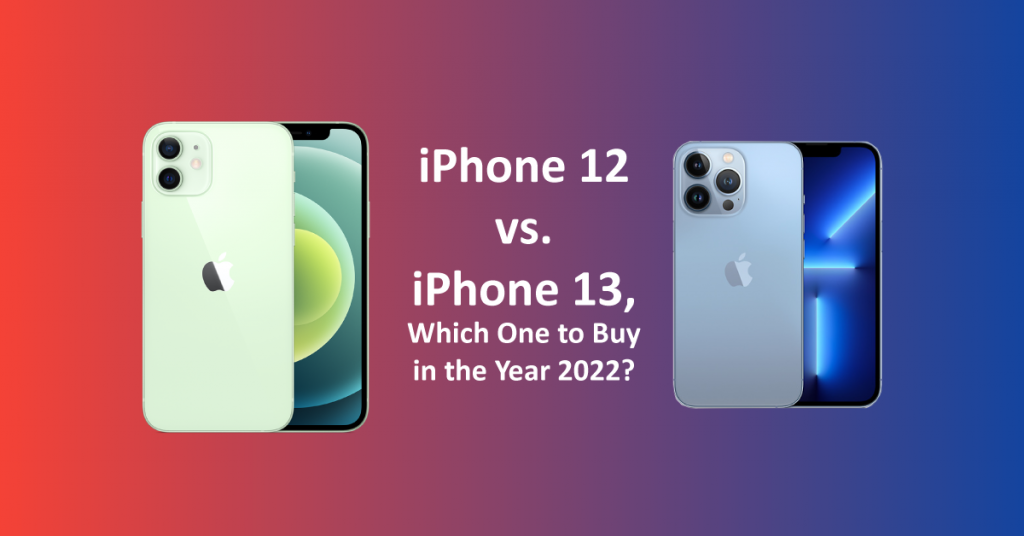 With the launch of the new iPhone 13, the comparison between iPhone 11 and 12 has shifted to iPhone 12 and 13. You may feel the model doesn’t have many modifications from a distance. However, the new iPhone 13 has a new camera system, a little changed design, a better battery, a smaller notch and is Apple’s best-selling smartphone.
While the iPhone 13 is the most recent jump for the company, several changes may not be appealing to those eager to upgrade. However, an enhanced battery, processor, and cameras are something to expect.
You might be thinking about whether to buy the new iPhone 13 or the year-old iPhone 12, so here’s a comparison of the two phones that highlights their similarities and some important differences.

Comparison between iPhone 12 and iPhone 13

Last year, Apple upgraded the iPhone design, and no one expected a substantial redesign in the iPhone 13 series this year. We can also be confident that there won’t be any substantial design changes in the iPhones for a couple of years based on Apple’s record.
The proportions of the iPhone 12 and iPhone 13 are comparable but not identical. The new iPhone 13 weighs 10 grams more than the iPhone 12, making it a bit heavier.
Both phones have aluminum borders with front and back glass designs; however, the colors are slightly different. The iPhone 13 is available in Blue, Midnight, Pink, Starlight, and Product Red, whereas the iPhone 12 is available in Red, White, Black, Green, Blue, and Purple colors.
The most significant difference between their design is that the company switched to a diagonally oriented dual-camera module from a vertically oriented one. With the newest camera module, the camera lenses are likewise slightly larger. In addition, both phones use Apple’s latest nano-crystalline Ceramic shield technology for screen protection, which the company claims make the screens four times stronger than prior iPhones.

Even though the iPhone 13 and iPhone 12 have the same number of lenses, the cases are identical. The 12-megapixel main camera of the iPhone 13 is the largest sensor ever used in a dual-camera iPhone. Compared to the iPhone 12 camera, the new sensor allows in 47 percent lighter, resulting in crisper photographs.
Low-light photographs on the iPhone 13 are far better than on the iPhone 12 because of the combination of big sensors and greater stabilization. In addition, the iPhone 13’s ultrawide sensor has also improved, with a wider f 1.8 aperture compared to the iPhone 12’s smaller f 2.4 aperture. This increase in gap delivers a boost in low-light situations.
As usual, the iPhone’s camera software has improved. In addition, a new “Photographic styles” function has been added, allowing you to apply custom aesthetics to all of your captured photographs. This is more than just using filters; it’s about adjusting the attention of iPhone 13 photographs without making them appear manufactured.
In terms of video, the iPhone 13 has a new function called “Cinematic mode,” which intelligently selects and shifts focal points for better results. It also changes focus automatically when the topic moves and predicts when the subject will enter the picture.

The beginning costs of the iPhone 12 appear to be $100 less than the corresponding iPhone 13 at first glance, but that’s before you consider storage space. The 12 version starts at 64GB, which was plenty of space a few years ago. However, now that apps are getting bigger and cameras are shooting more detailed photographs and videos progressively, you can reach the storage limit throughout your time with the phone. On the other hand, the iPhone 13 starts at 128GB; therefore, its price difference is only $50.
With that $50 difference, you get a lot more bang for your buck with the iPhone 13. However, if all you want is a 5G iPhone and aren’t planning to install many apps, the iPhone 12 is less expensive while still offering most of the same capabilities as the iPhone 13.

Compared to the iPhone 12, the iPhone 13 sports a 20% smaller Face ID notch. This means more screen real estate and less annoyance from the notch.

This year’s iPhone 13 enables Dual eSIM, which isn’t available on the iPhone 12.

Both the iPhone 13 and iPhone 12 are water-resistant for up to 30 minutes at a depth of 6 meters. Under IEC standard 60529. Both phones are rated IP68 (maximum depth of 6 meters for 30 minutes).
MagSafe is included in both to support accessories and wireless charges.